Today is the fourth of the 6 posts leading to the release of the last book in the Elven Chronicles, Kings of the Empire by M. A. Abraham on February 16, 2017. See my post with the preorder links.

It has been a few years since the series started and I along with the many fans of the Elven world have been emotionally connected to one character or another, cheered with each triumph and wept at each loss they suffered in the battle with the demon horde.

One thing that stayed constant is their absolute love for their Life Mates and I am sharing the bonding scenes in each book which are my fave in all the books.

YOU ARE MINE, I AM YOURS, TOGETHER WE ARE ONE 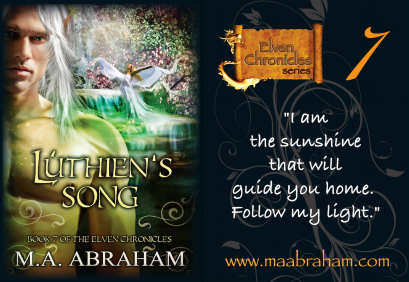 KING INGWËR of the Grey Elven Kingdom mated to NÁTULCIEN, a Daughter of the Sun…

“… as our family is with us, I suggest we complete our bond now.” Nátulcien decided.
Ingwër’s smile widened as he took her hands in his and spoke. “My love, my soul has waited for you to be completed, I seek to speak the formal words of bonding with you. Is this also your desire?”
“It is.” Nátulcien confirmed.
“Nátulcien, you are my heart’s desire, the reason for my life and the light of my soul. I am yours.” Ingwër answered.
“Ingwër, for you, I hold the light. May it burn forever bright in its guidance of yours, for you are he for whom I was created. Ingwër, I am yours.” Nátulcien promised.
“I bring you honor, as I give the same to you and your faith in my love. Your presence is a gift the creator has granted to me and mine. I will guard your light and our love will make your essence stronger through this joining. Nátulcien, you are mine.”
“Share my eternity as I will yours. Ingwër, you are mine.” Nátulcien spoke firmly.
As they spoke, they grew closer, never once losing eye contact or releasing their handhold. As one, they spoke the final words. “Together, we are one.”
Ainariël and Ailumn leaned back against their Life Mates and smiled as they watched the union between Ingwër and Nátulcien. They were happy for them. As far as they were concerned, there was nothing more important in an Elf’s life than the moment they were bonded with their Soul Mate. It was a defining moment and one that completed them through eternity. This was their belief, the foundation of their lives. They had found their Life Mates early in life, their father had needed to wait for his for some reason only known to the creator. They watched as the newly joined couple exchanged a passionate kiss and when the two drew apart Haldemir teased.
“I bet the first child will be a boy.”
Vandamir, to be obstinate, disagreed. “A girl.”
Nátulcien blushed as she smiled and answered. “I am a Daughter of the Sun, just like Lúthien. We can only produce female offspring.”

GOLRADIR, former King of the Free Lands mated to LÚTHIEN, a Daughter of the Sun…

As Lúthien stood before Golradir, he reached for her and quit singing so he could speak. The children continued to chant as they formed a ring around them. They smiled happily as they held hands and skipped around and danced in the morning light.
“Come dance with me in sunshine my love. Share with me this moment and I will bring light and happiness to your soul.” Golradir repeated the words she had spoken to him the first time they had danced in the meadow.
As Lúthien drew closer to Golradir, he took her into his arms and danced as they had many times before and she smiled into his eyes as he raised his voice to rejoin the song the children were still singing. She didn’t hear the voices of the adult Elves as the parents of the children added their voices to their offspring, and neither heard when more voices joined them, until the entire forest rang with the sound of the ancient Elven love song.
Round and round Golradir whirled Lúthien as they laughed into each other’s eyes and he held her closer until she was pressed tight against him and his arms encircled her waist possessively. As she stretched up to kiss his lips lightly she replied.
“I would dance with you in sunlight for all eternity.”
“Your wish is my dream come true.” Golradir admitted as he stepped back slightly to take her hands in his so he could lift her fingers to his lips to deliver a tender kiss.
Without breaking eye contact, Golradir spoke. “Come speak with me the words of bonding and I will share my life and love with you. Lúthien, I am yours.”
“In sunshine I will bathe your soul and together we will share our light and love. Golradir, I am yours.” Lúthien spoke in response.
“In your light I have found reasons for living. Lúthien, you are mine.” Golradir sounded the words that signaled the next stage of the bonding ceremony and his heart skipped a beat it felt so full.
“In your love I have found completion. Golradir, you are mine.” Lúthien answered.
As one they spoke the final words. “Together, we are one.”
Golradir quickly lowered his lips to Lúthien’s and kissed her until they were both laboring for air. When he broke off the kiss, he grinned when the sound of other voices filtered through the haze he felt surrounded them and he spoke.
“Lúthien, you have made me the happiest Elf in the world.”
“Really?” Lúthien grinned back as she teased. “I think I know of a few ways of improving on that.”
Those who could hear them laughed, sounding as if they knew something Golradir didn’t when he looked at Lúthien in askance at her statement.
Lúthien smiled wider as she broke the news she had hoped to tell Golradir privately, but knew everyone else had already guessed.
“You see the extra bright glow that seems to beam from me?” Lúthien asked.
“Yes,” Golradir answered as he wondered what this was about. She had worn that extra light for a while he had noticed.

FOR THE KING AND ELVEN EMPIRE

There are no Life Mate finding each other in this boo, but there are lots of surprises…

Elendil, Gabriel, Eden, and their children are accompanying King Elrohir and his bride to the High Elven Kingdom, by invitation of his father, King Silas. What started off as a simple trip turns into a nightmare, as the children disappear while working in the forest. Eden and Gabriel are frantic. Where are their children? Why can’t they touch their life forces? They join their talents and go on a search, calling in every resource they can, but get no results. They reach out to the Empire for help, but that is quickly brought under control when Lothrariel arrives. Unfortunately, he didn’t get there quickly enough.

At Gabriel’s command, the Kings and Queens lead their armies into the High Elven Kingdom, but it is not Gabriel who will take command; it is Lothrariel. He has regained his ancient powers and searches for answers, but a power as ancient as his has hidden the answers. Who has done this? Why?

With their parents away, the children of the Light Elven Kingdom work behind the scenes to regain the freedom of their friends. There is only one Elf who can reach the children where they are; S’Larea. When they are finished, will the High Elven Kingdom be the same?

here is my review

Just when I thought the Elven Chronicles series cannot get better, M. A. Abraham surprised me yet again. Another amazing story that shows us that there is no greater power than the power of love, the love of a parent that will move heaven & earth to rescue a child in danger, the love of a Life Mate who will bring down ANY obstacle standing in the way of reaching their soul mate or the innocent, but fierce love of children that will reach past all imaginable bounds to help their loved ones. This story brought up a whole spectrum of emotions, but the happy feeling lingers long after.

Here is your chance to grab the next two books in the series at a very low price for a limited time.

Check out this awesome trailer for the series, created by Wicked Muse

There is a Thunderclap campaign for the KINGS OF THE EMPIRE release day, your support and shares are appreciated.

Thank you for joining me in the celebration and I hope to see you next Sunday.

Also there will be a release party on FB on February 15-16 to celebrate the release of the “Kings of the Empire”. Come join in!

Until then… read a book, listen to a book and don’t forget to show your love by leaving a review!